Weaving Tricks of the Trade: One Weaver's Approach to Spinning

But I’ve gotten a lot of pleasure from making yarn this way. However you think about spinning and weaving, here is this weaver's approach to spinning:

I’m not one of those admirable souls who plans ahead. And while I sometimes conceive of a handspun, handwoven project and go from there, more often, I proceed in an impetuous, feely way.

This usually begins when I’m exposed to a lot of great fiber. I don’t think ahead at all; I just swoon and buy. Turn me loose in the market at SOAR or Rhinebeck or any weaving conference or local shop, and I fall in love at first sight—over and over. I go for small quantities for the obvious reason: what am I going to do with it? Unless it’s an unusually yummy fleece, of which I have a few.

In this manner, I have amassed a significant stash. I run my hands through it from time to time in a Scrooge McDuck fashion, loving the feel, the sheen, the squeezability. When I have a bit of time to spin, I pull out whatever speaks to me at the moment and spin it however it seems to want to be spun. 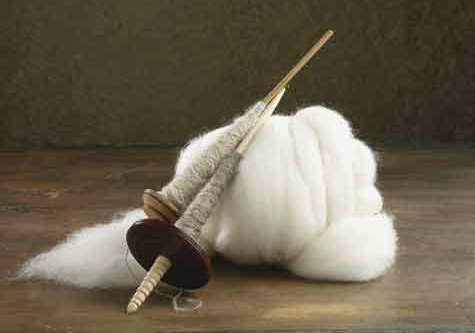 I do have general preferences. I like fine, fairly regular yarns. Not just because that’s the easiest kind to spin, but because they lend themselves best to weaving wearable fabrics. And while knitters savor the time they get to fondle their handspun while they are knitting, I plan to savor the feel of my handspun in the silk scarf around my neck or the woolly little blanket on my lap.

So I take the fiber that calls out to me at the moment, spin it willy-nilly for the pleasure of the process, and hang it up where I can look at it. Now, I’m not one of those spinners who makes yarn skeins as ends in themselves; I really do want to use my handspun. My collection of skeins gathers there on a hanging rod, and I look at them daily. Then, when I have the time and temperament to do some weaving, I visit my yarn just as I would visit my local yarn shop. That is, I see a yarn that quite catches my fancy—or maybe three or four yarns together that sing in harmony—and I think, “What can I make out of that?” Only then do I go into analytical mode and figure how much yarn I have, what sett it requires, what weave structure would show it off well, how long to measure my warp, and so on.

This is backward, I know. I so admire spinner-weavers who take the opposite approach. But I’ve gotten a lot of casual pleasure from making yarn and cloth this way. However you think about spinning and weaving, here are some basics that I find useful:

One Weaver's Approach to Spinning

Weaving with handspun holds many of the same pleasures for me as cooking from scratch. It would be most unusual to think, in April, that I will want a gazpacho in July so I’d better get those tomatoes, cucumbers, peppers, and whatnot in the ground. Instead, I love going out into the garden and inventing a meal from what I find. Weaving from scratch is even better, though, because the end product has a long life of its own.