In this first of a three part series, Madelyn describes the underlying characteristics of block doubleweave and finnweave after explaining how doubleweave differs from doublewidth weaving.

Hi Madelyn!
I am confused by what the word “doubleweave” really means. A friend of mine wove a blanket she called doubleweave, but it looks like a regular 4-shaft twill to me. Just curious. — Phyllis

Weavers often use the word doubleweave for something they have woven (usually a blanket) that is much wider than their loom’s weaving width (this is also called weaving “doublewide”). The blanket is woven in two layers on the loom (therefore the label “doubleweave”), but with a single weft that goes across the top layer, then across the bottom layer, then back across the bottom layer, and then back across the top layer. When this order is repeated, two selvedges, one on the top and one on the bottom, are produced on the shuttle’s starting edge with a fold on the opposite edge. To do this, whatever structure is being woven will require twice as many shafts as it would for a single layer. If your friend’s blanket is a 4-shaft twill, it would have required eight shafts woven doublewide.

To be called “doubleweave” off the loom, the fabric must consist of two identifiable weave structures that are connected in some way. (Your friend’s blanket is therefore not doubleweave even though it was woven in two layers.) The most common version of doubleweave is what we call block doubleweave or patterned doubleweave, as in photo a. This fabric consists of two independent weave structures (both plain weave) that are connected permanently to each other because they change faces (blue on top or white on top). They are usually each woven in a different color, so that when one is on top it is the “pattern,” and when the other is on top it is the “background.” Characteristic of its usual form is the slight saw-tooth look on either the right or left edge of a design and on either the top or bottom. In Photo a, you can see this on the bottom and left edges of the design (the same thing happens on the opposite edges on the back in photo b). 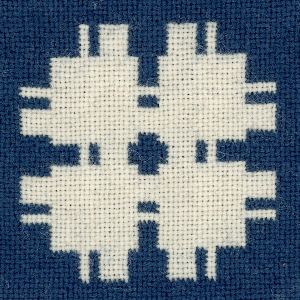 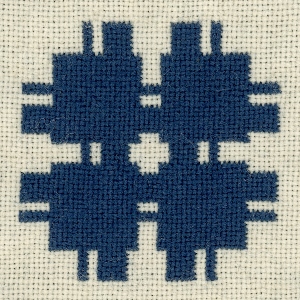 b) Block (patterned) doubleweave, back

It’s interesting to note that a variation of block doubleweave—finnweave— is a method of doing doubleweave pick-up that has smooth edges on all four sides of the design on the face of the fabric, and saw-tooth edges on all four sides on the back of the fabric (see photos c and d). If the example in Photo a is done with pick-up, a separate pick-up must be made for every pick. For finnweave, the pick-up is made for every other pick. The elimination of the saw tooth is done by picking up an extra pattern thread on the edge of the design. 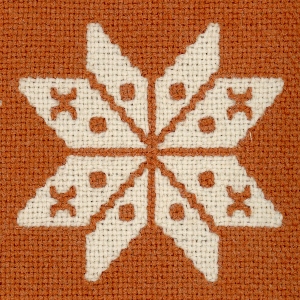 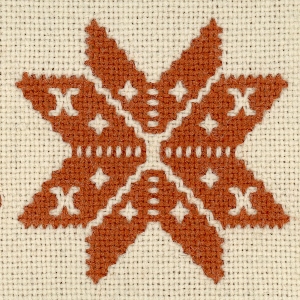 There are several other versions of true doubleweave that I’ll describe in the next Ask Madelyn.