A Little Handwoven Idiosyncrasy (and a Little Math)

Ever wonder about the weird fractions in Handwoven? Based on the mail we get, you are not alone.

Centering in the reed or rigid-heddle doesn't have to be exact. Photo by George Boe.

In today’s world of sturdy, square, and well-built looms, I imagine not being perfectly centered in the reed or rigid heddle wouldn’t have an adverse effect on weaving a project. I’m not recommending it as a practice, but several people have told me they needed to change course mid-stream while warping their loom or simply miscalculated and ended with a very uncentered warp. When I’ve asked if it caused any problems they said no, they simply sat over on that side of their bench and wove as if that was the center. In the case of a multi-harness loom if you get your warp centering off by an inch or so, you might have enough of a difference between the width of your reed and the beater to simply slide the reed one way or the other until the warp is centered.

All that said, when tech editing for the magazines, we are very exact when we determine width in the reed or rigid heddle for the project specs. We calculate this number based on the size of reed or rigid-heddle and use the size as our denominator. If you’ve ever wondered why you see unreduced fractions such as 8/12 or 6/8 in the project specs in Handwoven and Little Looms, this is why. Leaving the fraction unreduced is useful for anyone who counts dents, and can also serve as a little reminder when you are setting up your project as to which reed or rigid heddle you should be using.

Yesterday I explained the reed width calculation to a project author in detail. It may seem obvious, but there is a little bit of math that might surprise you.

Suppose you have 151 warp ends and are sleying them 1 per dent in a 12-dent reed or rigid-heddle.

There are two methods to calculate the number of dents needed beyond 12": 1. Subtract 144 from 151. 2. Multiply 12 times the remainder of .5833333 (Many people assume that the remainder just needs to be rounded up to the next whole number, but in fact it is a percentage of the divisor [in this case 12], not of an inch.) 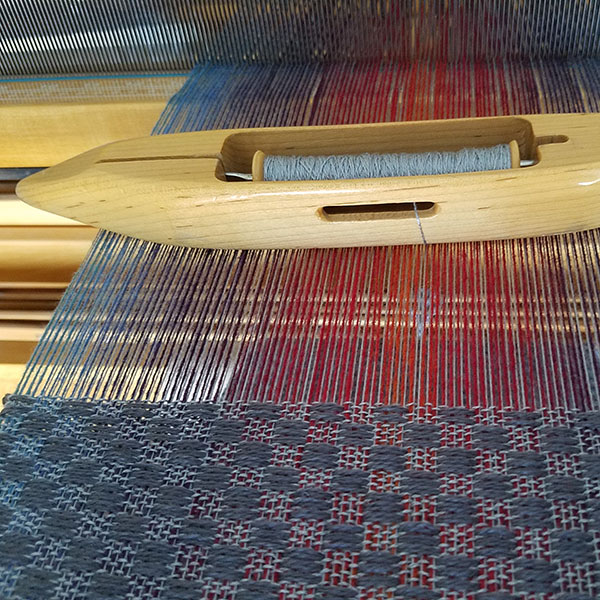 Having more than one end per dent changes the reed width calculation slightly. Photo by: Susan E. Horton

It is a little more tricky when you are sleying multiple ends per dent. In that case you divide the first time by the sett and but multiply the remainder by the reed or rigid-heddle size.

Suppose you have 371 warp ends and are sleying them 2 per dent in a 12-dent reed or rigid-heddle for an epi of 24.

You may never have wanted to know this kind of detail about calculating width in the reed or rigid heddle, but at least now you know why we have those weird fractions in Handwoven.