A Handwoven Chasuble and Stole to Thank a Priest

Read how Diane came up with an idea for weaving and sewing a chasuble and stole for a young priest from the region where she lives in Italy. It’s an unusual story, but one worth telling.

I am Canadian, but I have lived in Italy for the last 10 years, and I have been weaving for over 40 years. Recently I came up with an idea for weaving and sewing a chasuble and stole for a young priest from the region. It’s an unusual story, but one worth telling.

Shortly after the earthquake, local civil protection officials had the good sense to assess the damages in the Catholic church that housed a beloved Madonna del Domo statue. This was the statue carried on parishioners’ shoulders during a procession that is part of the Ferragosto, a Roman Catholic festival on August 15th that celebrates the Assumption of the Virgin Mary into heaven. While inspecting the church, the civil protection officials noticed damage to the Madonna sculpture and immediately decided to remove it to store in a safer place. Not long after removing the Madonna, another earthquake caused the church’s ceiling to collapse, destroying everything inside.

Given the extent of the damage, the general public wanted to help those affected by the earthquake as well as to venerate this Madonna. My husband, who taught fine arts for 30 years in Canada at the Université du Québec à Chicoutimi, offered to restore the sculpture.

Restoring the Madonna took nearly four months. Once restored, church volunteers carried her with them on the road. She traveled to various parishes in our region to help raise funds for rebuilding a small wooden church for the population of Castelsantangelo sul Nera.

To raise these funds, Don Fabio, a local priest from Fermignano, invested a lot of his time. Don Fabio went far beyond our expectations by organizing benefit dinners and contacting other parishes to organize other fundraising events. His efforts resulted in the raising of enough funds to soon start construction of a new church.

Don Fabio’s devotion coupled with the fact that one of his green chausables was worn and needed replacing inspired me to weave a new one for him as a gift to thank him for all of his work. He left me free to express myself with a design of my choosing.

When I weave a chasuble, I weave two lengths of fabric. For this chasuble, I also used two separate looms: a four-shaft and an eight-shaft loom. I wove the outer part of the chasuble on the four-shaft loom to a width of 25 inches and a length of 240 inches, which I then cut into two pieces. I threaded two blocks of four-shaft crackle with one color of green pearl cotton in the warp and used the same green and unbleached cotton for weft. I wove the central part of the chasuble at a reed width of 14 inches and to a length of 120 inches. Then I rethreaded my eight-shaft loom for the stole because its width in the reed was closer to 10 inches. For the central part of the chasuble and the stole, I modified a draft from Mary E. Snyder’s book The Crackle Weave to get the beautiful big crosses. I used unbleached cotton for the warp and green and unbleached cotton for the weft.

Although most chasubles sold today are made of synthetic fibers, I decided to go a different route. During the hot summers in Italy, the priests suffer from ambient heat, especially in their offices. For this reason, I chose to use 16/2 pearl cotton to create a light and airy chasuble that would be more comfortable. For all three of the cloths, I sett the warp at 30 ends per inch. 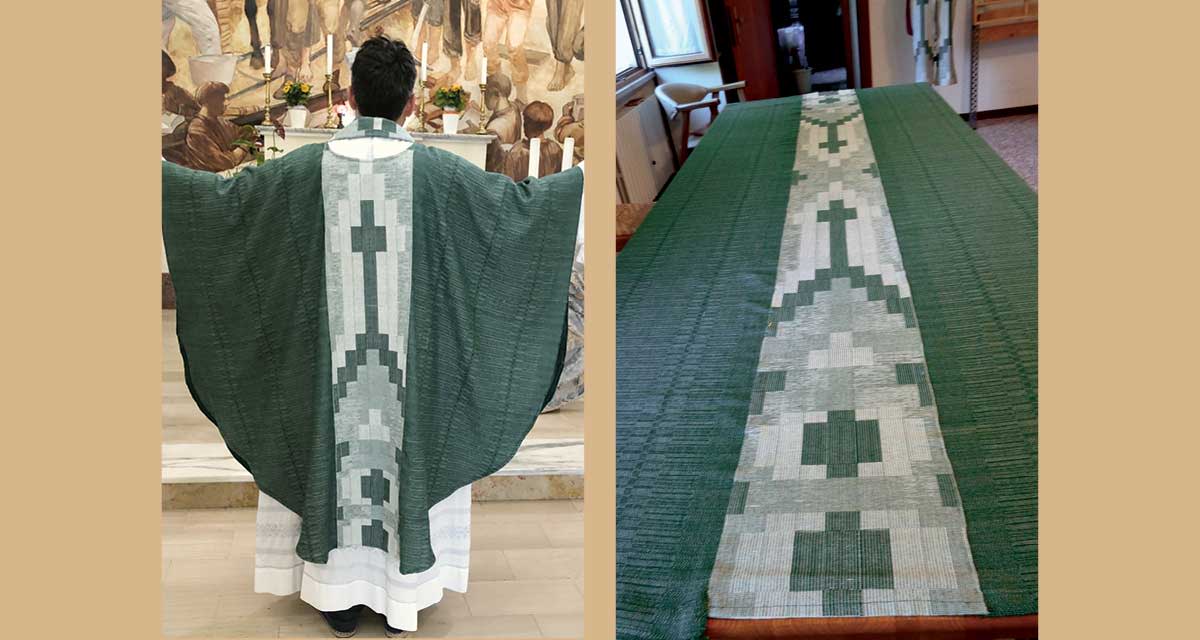 Above, left: The chasuble is a simple garment but has great drape. Above, right: Rather than sewing seams that could be bulky, Diane overlapped the selvedge edges and stitched along them. Photo courtesy of Diane Roch-Magrini

I created my own sewing pattern for the chasuble—if you examine one, you can see that it is a simple garment. I based my pattern on a poncho, which is square with an opening for the head. For the chasuble, I simply rounded off the edges. I didn’t line any of the pieces, preferring instead to keep the chasuble as light as possible. In fact, if you hold the fabric up to the light, you can see through it.

I used the three pieces of cloth that I wove for the chasuble (the central part and the exterior length cut in two pieces) at their full widths, stitching them along the overlapped selvedge edges because they were straight. I did not use seams because the seam allowances would weigh down the chasuble.

For the rounded bottom of the chasuble and along the rounded neckline, I sewed bias tape on the inside to support the fabric where I had cut it. I must admit that every time I had to cut directly into the fabric, I felt a pinch to the heart, especially when cutting the neck opening!

By my calculations, warping and weaving the chasuble and stole took me about 180 hours and the sewing about 8 hours.

Don Fabio is very happy with his new chasuble. The very next morning after I gave it to him, he wore it to celebrate mass in his parish of Fermignano. What more can be said!