Robin Wilton and Susan Du Bois put together a few different things they learned from Handwoven to design some very special scarves.

A library full of Handwoven issues is an amazing treasure trove of timeless ideas, and Handwoven has a tradition of supporting the greater good. With that in mind, our goal for this project was to design two 4-shaft silk scarves that Treenway Silks could make into a kit to help raise awareness of cystic fibrosis. Treenway Silks will donate 10 percent of the kit sales to Andrea’s angels (Aa) to help find a cure for cystic fibrosis.

Past Handwoven issues inspired us to use a name draft as a way to connect the scarves’ draft to the cause. What phrase? Deciding that became easy when we recalled that “65 roses” is a term often used by young children with cystic fibrosis to pronounce the name of their disease. As we wanted a bit longer phrase, we settled on “#65RosesAa.” There were several codes available, but for fun, we created one of our own by assigning blocks a, b, c, or d to each of the letters of the alphabet, the numbers 1 through 10, and some of the symbols on a keyboard.

Name drafts are traditionally woven as overshot, but we wanted a structure with more drape. Past Handwoven articles on block drafts and profile drafts showed how to take a profile draft and apply different structures to it. This was a great idea, but there was one more constraint—we wanted the scarves to be woven on a 4-shaft loom. So which structures could give four blocks on four shafts? Handwoven to the rescue again! We chose crackle because it has four blocks on four shafts and can be woven with one shuttle. 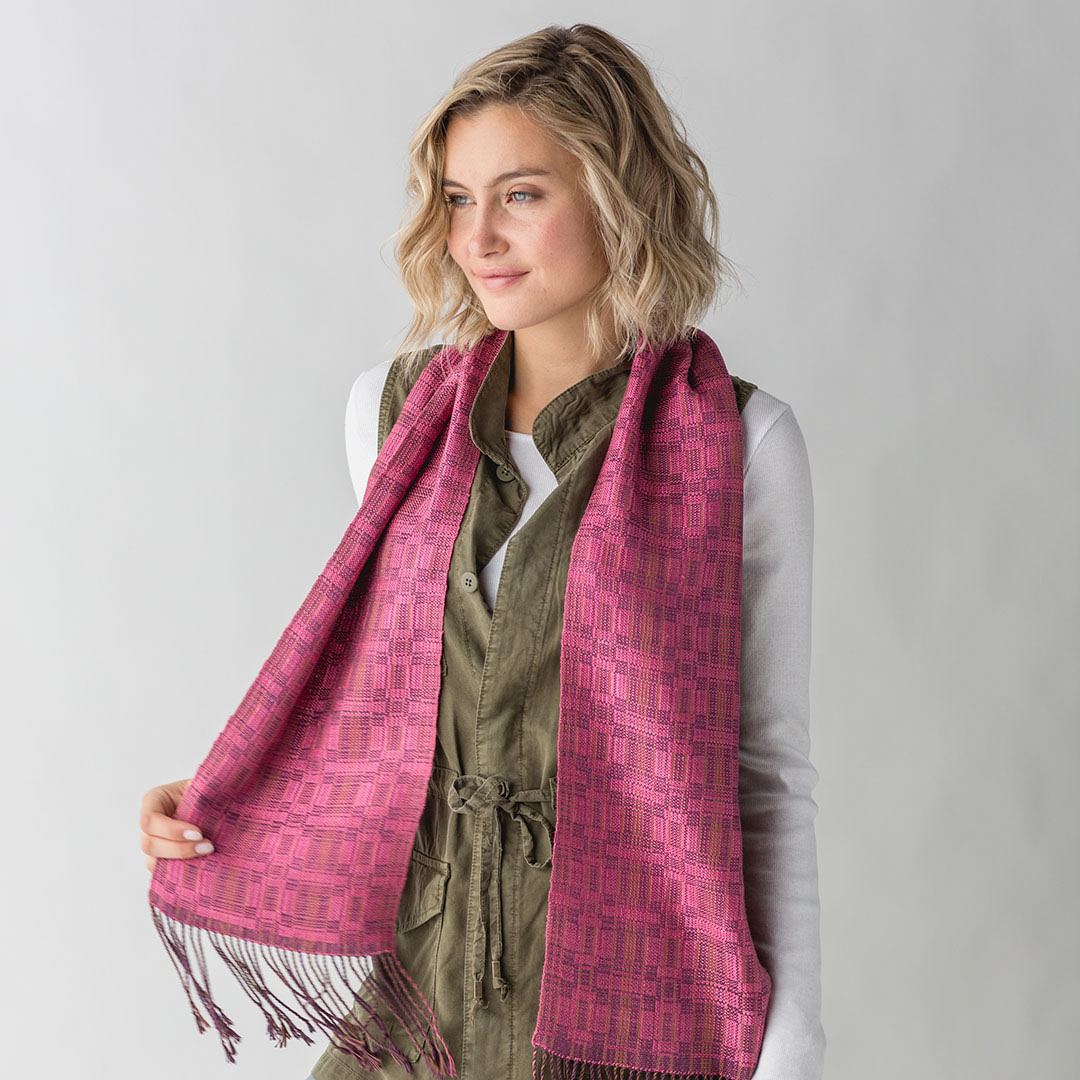 Using our code, we developed a profile draft with the name “#65RosesAa” as the basis. Then we expanded it for symmetry, added reversals, and applied a bit of creative license by adding or deleting repeats. Once the profile draft was established, we used block substitution to change it into a crackle threading draft with a standard 2/2 twill tie-up and an as-drawn-in treadling. The one-shuttle weave gave the scarves great drape and also made weaving them easier.

Choosing colors was both fun and challenging. To celebrate both Handwoven’s fortieth (ruby) anniversary and the word “rose” in the name draft, Treenway Silks created a warm rosy color based on the rose variety Hermosa that we used for the weft. The warp is a deep red-purple with stripes of similarly valued brown (for the rose stems) that add a subtle richness.