On (Not) Weaving with Toddlers

You don’t have to weave with kids to teach them to love weaving.

Over the past month or so, my 3-year-old has developed an obsession with Tom Knisely and Tom’s book, The Weaver’s Surprise. We read the book, and we watch Tom’s promos for his video workshops. Naturally I thought maybe he was ready to weave on a real loom, so I got out the little frame loom I got him when he was a baby, warped it up, cut up some lengths of fun yarns, and got ready to have a Magical Experience with my child.

He was delighted and exclaimed, “I a weaver! I weave a rug yike Tom!” and went to place his first carefully chosen piece of yarn. I would love to include a photo of him weaving at this point in the article, but immediately after putting that yarn through the first warp thread, he lost interest. He then proceded to throw the rest of the yarn in the air like confetti (“Yook Mama! It raining!”) and then dismantle the warp so he could run around the room with it streaming behind him as he went. Kids! 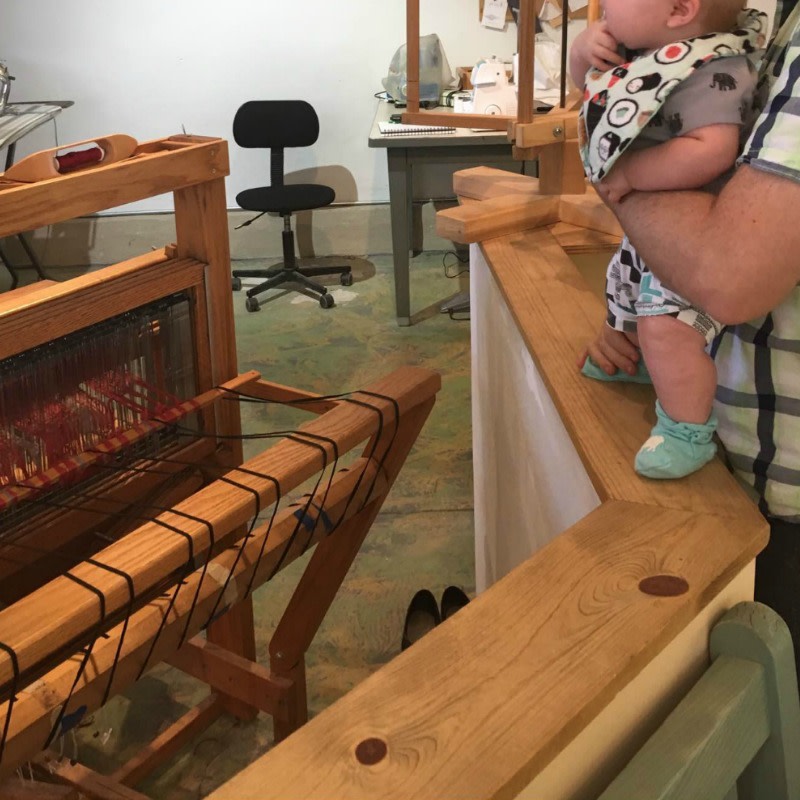 Christina’s son in earlier days when he had slightly more patience for weaving.

Now this doesn’t mean I’ve given up on teaching him. Instead we talk about the “big loom,” its parts, and the different tools needed to weave. (The "small loom" is the one I normally use for weaving and is located upstairs in another room, far away from his sticky fingers.) I let him sit at the loom and throw the shuttle back and forth and move the beater. He especially loves my oversized, antique industrial shuttles and delights in pulling out the giant pirns and then putting them back in. It’s easy for his small hands to manipulate the large pieces, much more so than with a normal-sized shuttle. (This also has the bonus of keeping my shuttles safe. Case in point: I tried to find an antique shuttle to photograph for this post, and when the small child was asked where it was, he replied, very innocently, "I nuh know!")

Is he weaving? No, but he’s learning about the loom and how it works. He knows the names of many of the parts and tools. He honestly understands more about weaving than most adults. (“Weaving—that’s the one with hooks, right?”) As a bonus, he’s also gaining valuable motor skills as he plays with the loom and the tools.

If you have kids in your life, especially ones as little as mine, don’t feel despondent if they don’t take to actual weaving right away. It’s easy for them to get distracted and frustrated—this is all developmentally normal. If they’re not ready to weave, that doesn’t mean you can’t let them experience weaving through playing with tools and looms. I like to think of the unwarped “big loom” a bit like his play kitchen: Is he actually cooking when he makes pretend soup? No. Is he learning while also developing a love of cooking? Absolutely. Now I can have him help me with simple tasks in the kitchen, and, eventually, he’ll be able to weave on his own little loom for more than 6 seconds.

You don’t have to teach kids how to weave to get them to love weaving. Eventually he will weave, but until then, we’ll enjoy not weaving together.