I might not have a holiday table, but I’ll have a Fourth of July dog.

I don’t know about you, but it feels as if as every holiday comes around, I think, Oh, I really wish I had woven that (fill in the blank) table runner. I’m not big on decorating our house with seasonal items, but I do think it’s fun to dress up the table with special runners or napkins that reflect what is being celebrated whether it is Christmas, a birthday, or Friday Night Sushi. This year for Independence Day and other national holidays, instead of weaving a table runner, I decided to weave a dog leash, to dress up the dog.

In April, I wrote about starting the leash for our new puppy, Deacon. I wanted to give inkling another try and weave a full project on an inkle loom. My hope was that over the course of weaving 7 feet, I would eventually develop better selvedges and a better understanding of how to weave on an inkle loom. I’m happy to say that I reached two goals: I have a fully-functional blue-and-red checked dog leash completed in time for the Fourth of July, and I am somewhat more familiar with inkle looms. Better selvedges, not so much. I tried multiple approaches, most of which involved fiddling around with them and trying to make them look even. Probably if I had just left them alone or tried only one method, I would have consistent selvedges, which in weaving is often the same as good. Luckily for me, Deacon isn’t very picky and, truth be told, has already run outside with the leash attached to his collar telling me that soon messy selvedges will be the least of my worries. 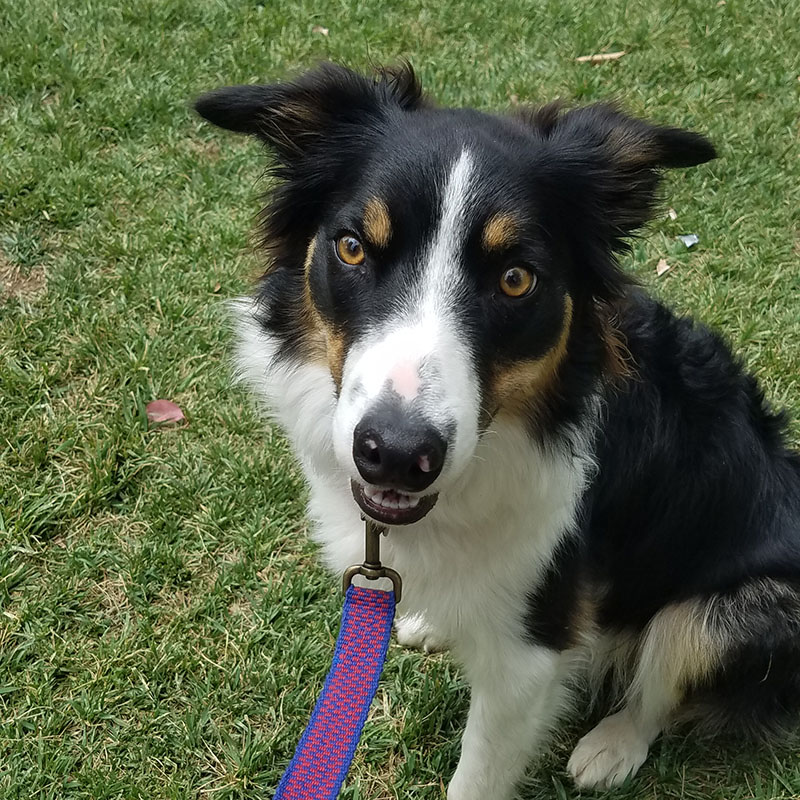 I am somewhat surprised at how long it took me to weave the leash. I can weave for long periods of time on a floor loom or rigid-heddle loom, but I found that I was more comfortable doing short stints on the inkle loom. I wove primarily on the weekends and kept at it pretty consistently, but it still took 2 months from start to finish. I was also surprised at how much it shrank during wet-finishing. When I took it off the loom, it was 84 inches long and after washing and drying it, it is 72 inches long. Finding just the right clasp was a challenge until I figured out that the type I wanted was an “antique brass swivel bolt snap” and was available on Etsy.

I’ll have to make do this holiday without a runner that is red, white, and blue, but I’m pretty happy with Deacon’s new leash. If we go to watch the local parade, he’ll be the snappiest dog, in a good way.