There was a time when weavers were told that rigid-heddle looms were only good for scarves and shawls—thank goodness for everyone this was proved wrong.

Jenny Sennott used memories of trips to the beach as the inspiration for her rigid-heddle towels.

I remember when I got my first rigid-heddle loom. I wove a few scarves on it, but then I wanted to try my hand at towels or napkins. I looked around a bit and mostly saw experts who claimed that it was not worth attempting. In order to weave towels or napkins (so I was led to believe), I would need to get a 2-heddle setup to achieve the finest sett possible or resign myself to weaving towels using extra-thick cottons. I am happy to say that while all this was “common knowledge” at one point, it’s pretty much all been debunked. Thanks to a slew of rigid-heddle weavers who ignored the weaving authorities and tried to weave towels anyway, I now know you can weave gorgeous towels and other table linens on the rigid-heddle loom.

In fact, we have a whole eBook full of fabulous rigid-heddle table linens to prove it: Handwoven Presents: Top Ten Rigid-Heddle Table and Kitchen Linens. Each and every one of these projects proves wrong the sentiment that beautiful towels and other linens are not possible on the rigid-heddle loom. In this eBook, you’ll find towels with fabulous drape, cheerful napkins, and sturdy placemats—all woven on the rigid-heddle loom, and most woven in traditional weaving yarns. 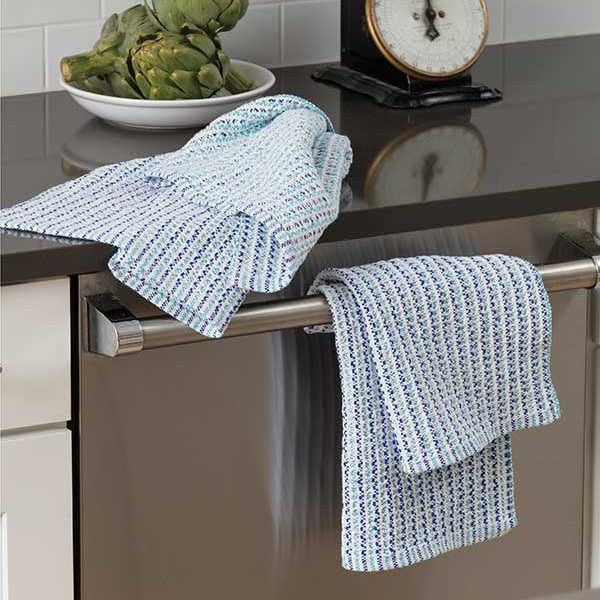 Of course there’s more to love in this eBook than just the types of projects—this is also the perfect eBook for the rigid-heddle weavers who want to build their skills. Start with the plain-weave patterns and work up to simple pick-up, beautiful inlay, and even waffle weave. You can pick up this eBook as a complete beginner and, after weaving through the projects, have the skills to confidently start designing your own rigid-heddle table and kitchen linens using a wide variety of techniques. Towels are, in my opinion, the best training project because even if you “mess up” in some way, chances are you’ll still have a perfectly serviceable towel.

Much has changed in the weaving world when it comes to rigid-heddle weaving since I warped up my first loom. More weavers are recognizing the potential that comes from such a “simple” little loom. It is possible to weave wonderful towels and so much more on the rigid-heddle loom. Sometimes it pays to ignore authority.