Weavers know inspiration can come from the most unlikely of places--including soil.

Karen and Diana’s pieces on display. PHOTO BY KAREN VAUGHAN

True beauty lies beneath the surface—this applies to people and to the physical planet on which we live. It’s easy to overlook soil except when gardening or stepping in a puddle of mud. It’s mostly flat, and while it covers much of the earth, with few exceptions it’s not that much to look at—unless you start digging.

Any soil scientist can tell you there is great beauty in the natural layering of soil found in the soil pits they dig while doing research in the field. The soil horizons, as they’re called, shift from color to color as the pit goes deeper. It’s more than just browns changing into other browns; rather, soils come in a rainbow of colors including bright yellow, bluish-gray, pink, and bright red. 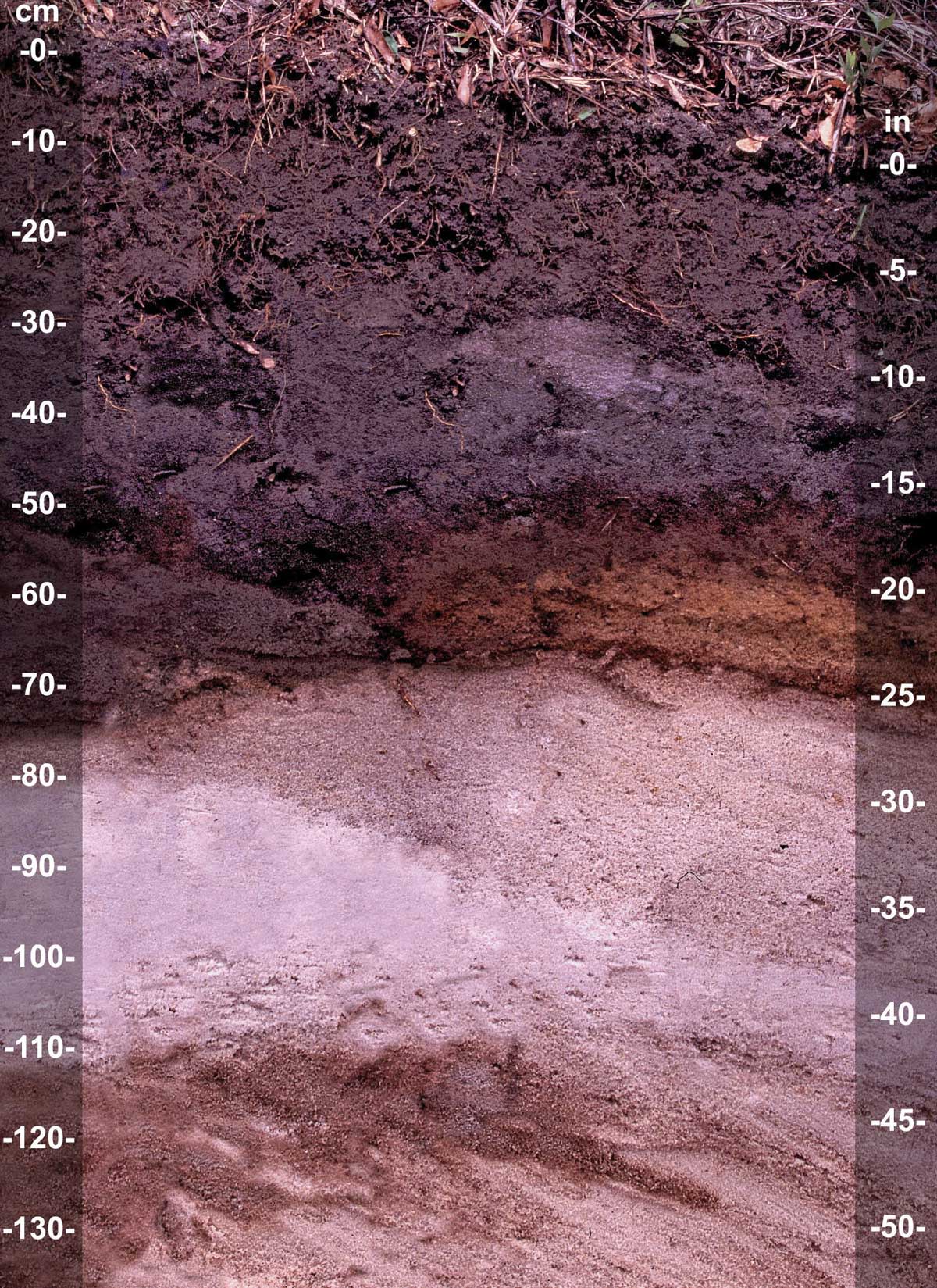 It’s this beauty that Karen Vaughan, University of Wyoming assistant professor of soil pedology, uses to emphasize the importance of soil to nonscientists. It is also the inspiration for a weaving exhibit featuring tapestries in yarn by Karen and artworks in paper by her colleague Diana Baumbach, associate professor of art. Each piece showcases a different soil profile from the state of Wyoming with the weaving materials and dyes sourced from local Wyoming vegetation, animals, soils, and more.

“The exciting, colorful, dynamic, and complex nature of soils helps fuel my interest in unlocking the secrets and sharing the wonder of soils with others,” said Karen. “Art and color are two powerful mechanisms through which people develop connections with the natural world, and it’s time we tap into that in soil science. People can’t care about what they don’t understand and value. This project was an attempt to open people’s eyes to the wonder belowground.”

When the University of Wyoming’s Biodiversity Institute posted a call for submissions for its Biodiversity in Art grant, Karen saw an opportunity and reached out to Diana. According to Diana, “[Karen] was aware of our mutual love of fibers and had the initial idea of depicting soil through weaving. As an artist myself, I found the colors, textures, and patterns of soil horizons visually stunning.” 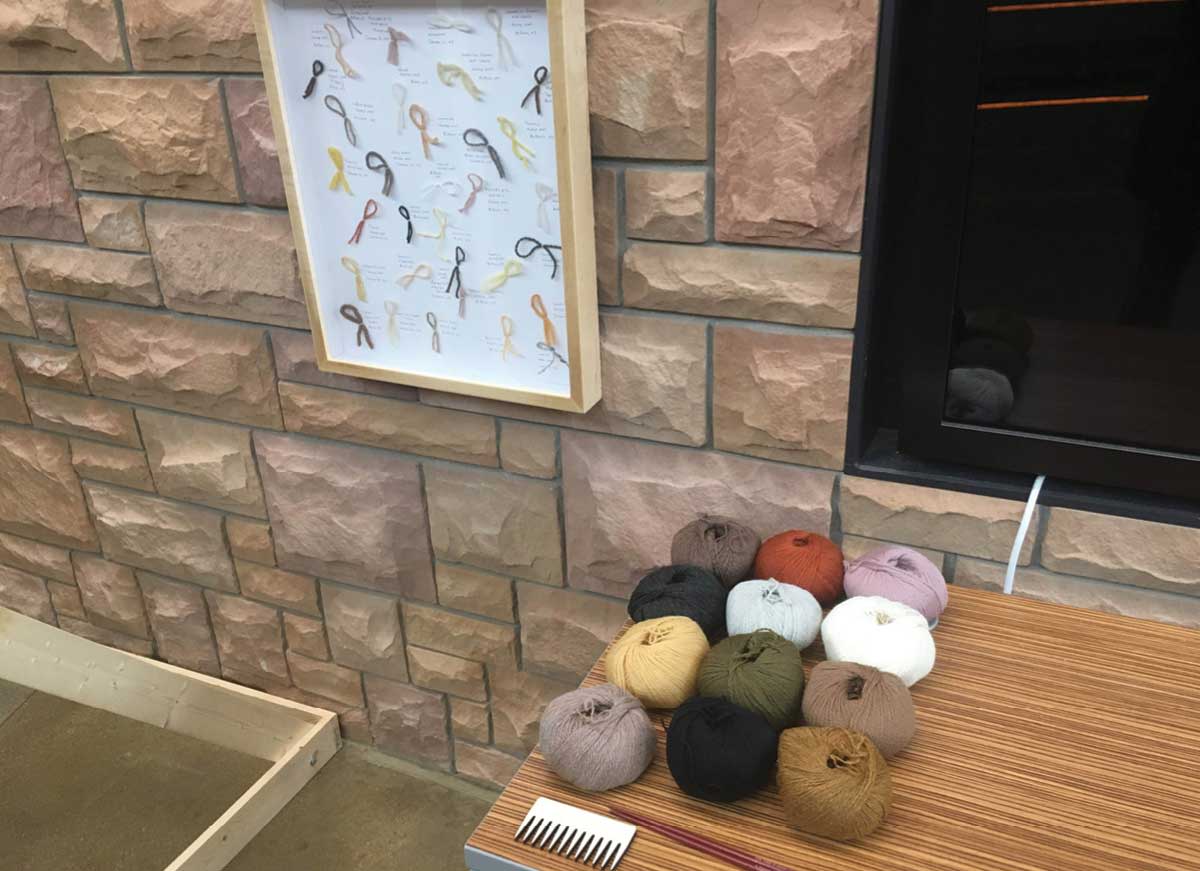 Samples of the hand-dyed and naturally colored yarns used in the tapestries for Soil: The Rainbow Beneath. PHOTO BY KAREN VAUGHAN

Once the proposal was accepted and funded, the two traveled throughout the state to some of Karen’s research sites along with one of Diana’s students. Sites included an arid rangeland soil, a floodplain, and a high alpine fen (marshy wetland). At each site, Diana collected plants and soils to use for papermaking for her share of the tapestries, a process that ended up being time-consuming but very much worth the effort.

“We initially thought that Karen would weave yarn and I would weave handmade paper, but I had to adjust my methods based on the limitations of my medium,” said Diana. “I made paper out of soil and plants grown in Wyoming soil. This involved harvesting the soil/plant matter, cutting it into small pieces, boiling it with soda ash, beating it into workable fibers, shaping it with a mold to create small sheets, and drying it. From there I cut, wove, and manipulated the paper into compositions inspired by soil. The colors of the paper have not been modified, aside from the occasional use of iron oxide. I was shocked by the variety in hues and organized the colors into a sort of rainbow in some of my pieces.” 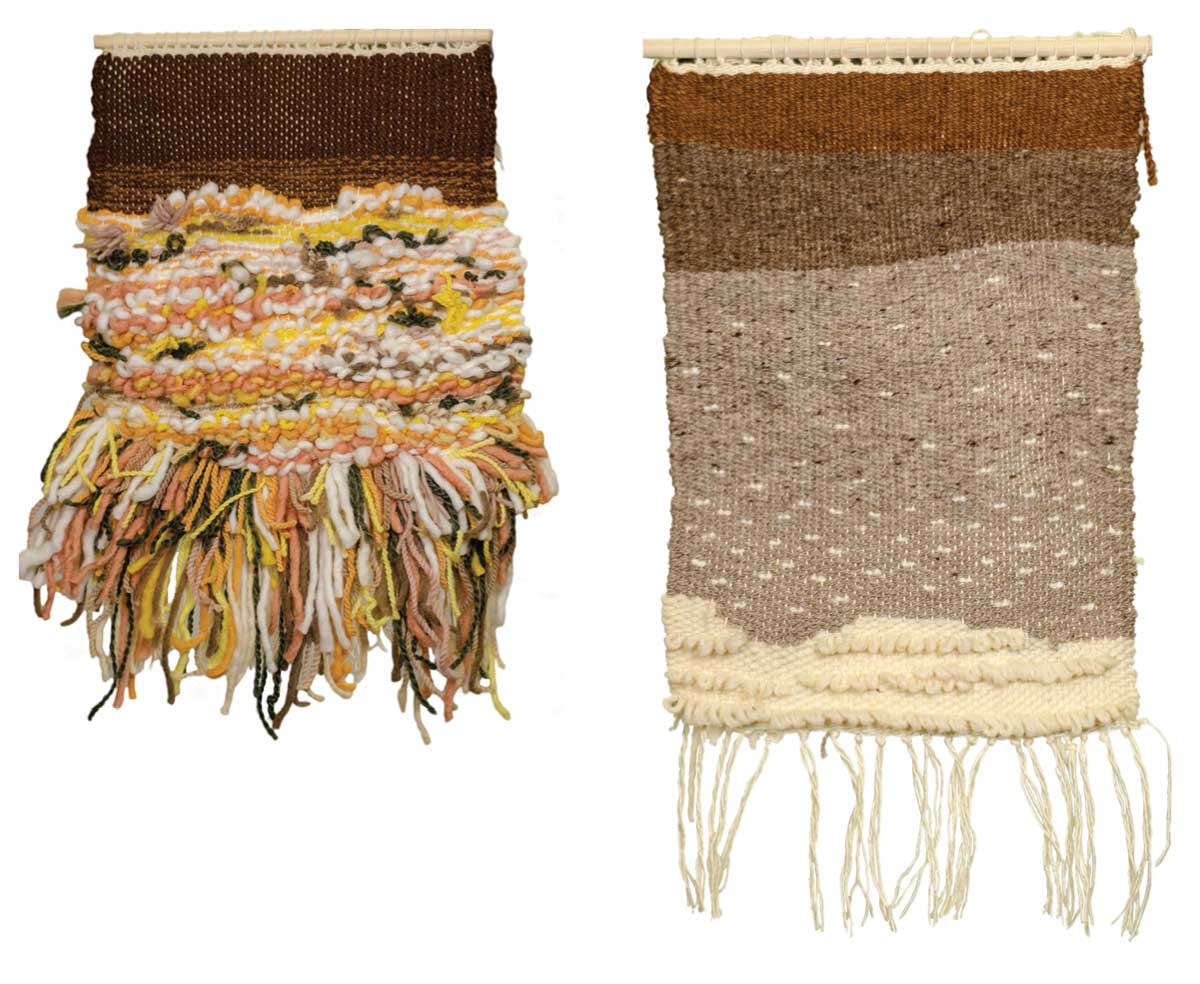 While Diana created her artwork out of paper, Karen sourced different types of wools from animals raised in Wyoming. While the connection between animals and soil might not seem obvious at first glance, as Diana points out, soil is a vital component of animal agriculture: animals not only walk on soil, they also eat plants that grow within and on top of soil. To color her yarns, Karen used dye-stuffs harvested from the areas around each soil horizon. “The urban soil—one of my favorites—is a special tapestry because I dyed the fibers with items from an urban environment (dandelions, cottonwood flowers, mustard, iron oxide from my lab, etc.),” said Karen.

For the weaving of the actual pieces, Karen and Diana worked independently, each taking on different soil horizons and working in their designated media. While Karen wove tapestries, Diana chose to use her handmade paper in several different ways for different effects: weaving, stacking, and cutting paper into shapes before arranging. Some pieces are literal interpretations of a soil horizon, while others focus instead on the colors, textures, or other aesthetic elements. The result is the exhibit Soil: The Rainbow Beneath, a surprisingly cohesive collection of artwork that showcases just how diverse soil can really be. According to both Karen and Diana, the responses they’ve received to their work have been overwhelmingly positive. 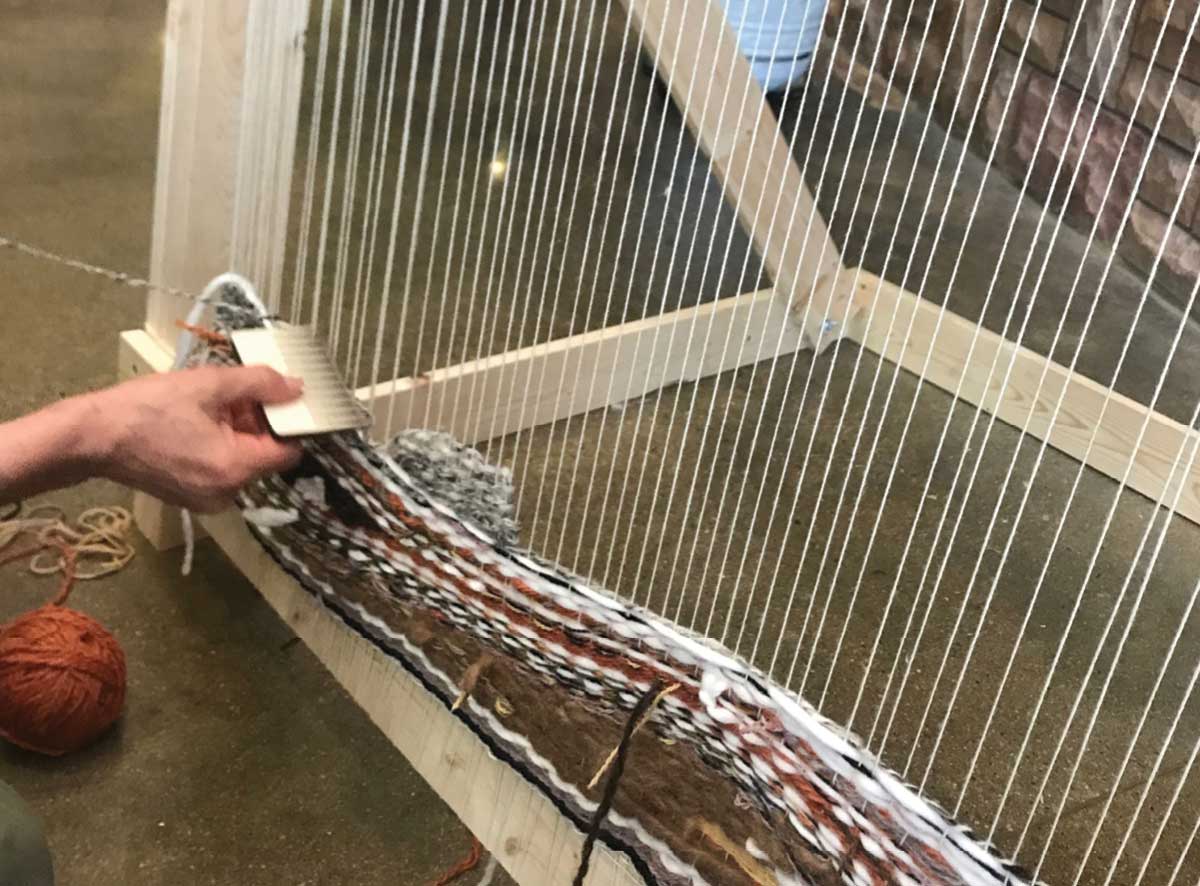 At the opening for Soil: The Rainbow Beneath attendees were encouraged to contribute their own weaving to a tapestry using the same yarns featured in the exhibit’s tapestries. PHOTO BY KAREN VAUGHAN

“The venues that we’ve shown this project at thus far have not been traditional art galleries but rather scientific museums/institutes within academia,” said Diana. “Audiences have been quite receptive, and children have been especially drawn to the community weaving wall that we created.”

For Karen, the exhibition served to emphasize her belief that showcasing the beauty of soil can help scientists from other disciplines better connect to it. “Some [attendees] had never thought about soil having layers (horizons) or being all these amazing colors,” said Karen. “It’s hard to showcase soils because they are usually locked up belowground. This was an opportunity to raise the soils up to a place of prominence where they belong.”

Diana’s experience on this project certainly helped her gain a new appreciation for the beauty of soil. Not only did she find a greater appreciation for soil but Diana also realized exactly how much the art world and the science world truly have in common. “This project has also made me realize that there are many similarities between seemingly different disciplines,” explained Diana. “Pedologists [scientists who study soil in its natural environments] use a variety of devices to describe what they see and then interpret based on those observations. That is essentially the same process that happens in art criticism. Also, we use the same systems to describe things like color—i.e., the Munsell color system. I’ve been able to take my art students at the University of Wyoming to Karen’s lab, and they were shocked to discover all of the intersections between art and soil science.” 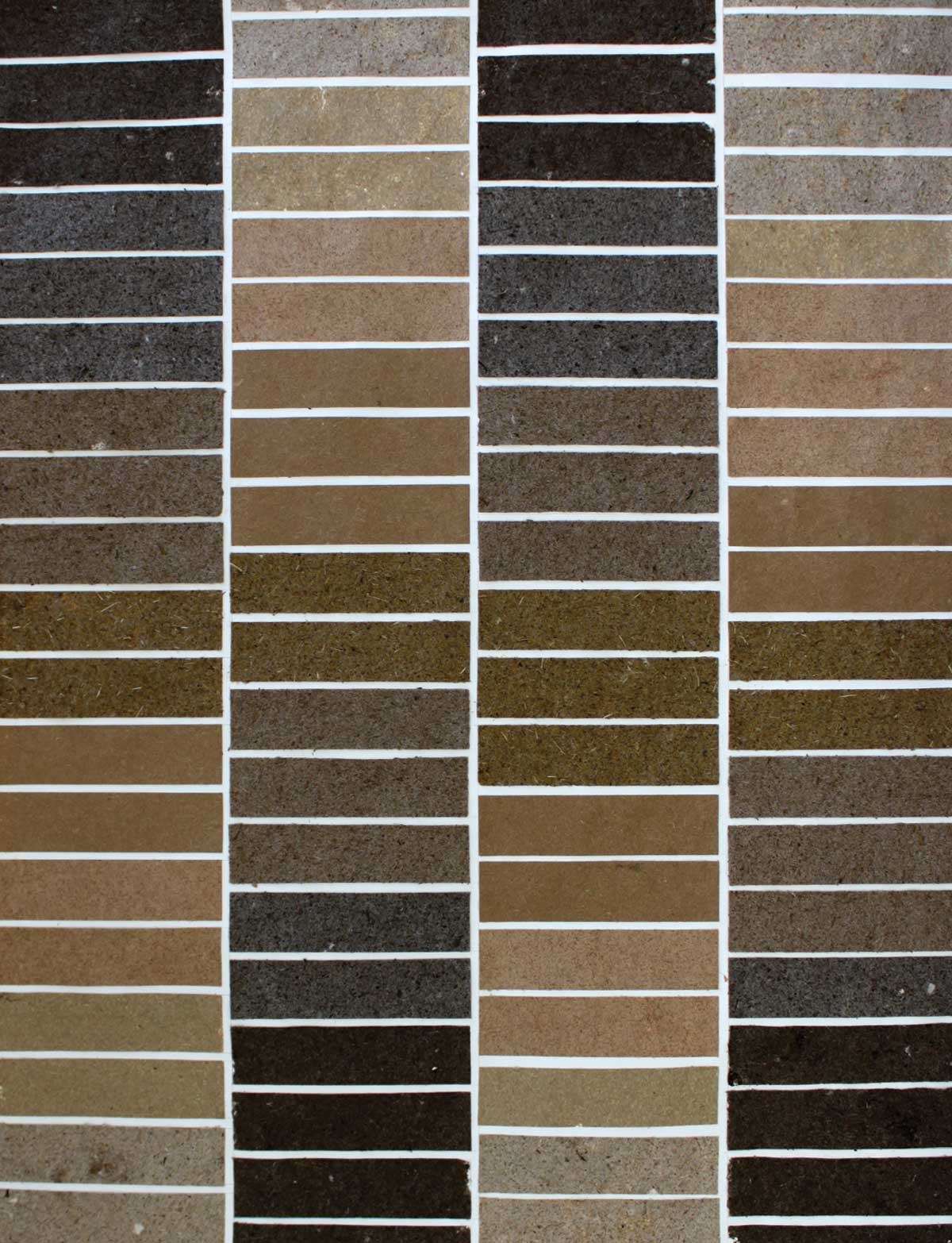 Together, Karen the scientist and Diana the artist worked to create more than just an exhibit—they created a teaching tool. In Soil: The Rainbow Beneath, their works of art showcase the beauty of an overlooked (often literally) part of the natural world, and in doing so, encourage people to start caring about soil in a new and different way. In Karen’s opinion, the opportunities provided by projects that intersect science and art are invaluable to her own research. “Exploring these other avenues of expression alongside the traditional research and publication pathway is important for me to create connections with soils as well as the people who live, eat, and breathe—thanks to soil.”